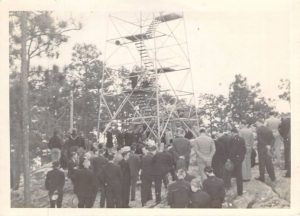 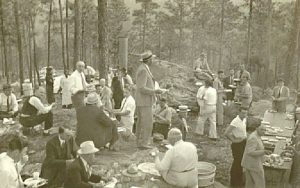 Initial credit for the construction of the fire tower at Smith Mountain belongs to Alabama Power Company. Before Martin Dam was completed in 1926, all the land within the future reservoir and most of the shoreline was completely cleared.  Also, much of the surrounding land was heavily eroded from poor agricultural practices and the clearing of almost all merchantable timber.  As soon as it was impounded, Lake Martin began filling up with eroded soil. In just two years, eroded soil from Sandy Creek created a deposit that measured 465 yards long, 65 yards wide, and 45 feet deep.  Similar deposits were dumped into the Lake by every creek emptying into it. In the upper reaches of the Lake below Irwin Shoals the siltation was even worse. Alabama Power Company officials became concerned that continued siltation could diminish the capacity of the reservoir and ultimately shorten the usable life of its hydroelectric plant.

Operating under the axiom that “anyone who plants trees will not want them to burn,” Alabama Power Company vigorously pursued a fire protection program.  Hence began the construction of a six tower fire detection network with Smith Mountain being the location of the first tower and the district office of the Alabama Division of Forestry (later the Alabama Forestry Commission).

The Smith Mountain Fire Tower is classified as an Aermotor Model LS-40.  Constructed of prefabricated, galvanized steel, the LS-40 observation tower is essentially an erector set composed piers, legs, stairs and landings, and a cab or house.  The overall height of the LS-40 is approximately 90 feet. Boys from the Dadeville CCC camp built a ranger station, cistern, filling station/shop, privy, map tables, picnic area, and other amenities. The signature rockwork of the CCC is still evident on Smith Mountain today. The Smith Mountain tower officially opened April 10, 1939 in a grand ceremony featuring a fish fry by the Kiwanis Club.

Shortly after construction, Alabama Power Company transferred the tower and associated 10 acre site to the Division of Forestry.  For the next four decades, Smith Mountain was the site of a lot of activity as the hub of this area’s fire protection district. Tower lookout personnel were officially called watchmen, but that term is not really accurate because at least two women are known to have “manned” the tower.  Smith Mountain personnel could stay in contact with watchmen in other towers and fire-fighting crews through a private, hand-cranked telephone system.

The 1970s saw changes in fire detection methods.  Aerial patrols and increased availability of telephone service in remote, rural areas decreased the need for fire towers as the primary means of fire detection.  In 1980, the Alabama Forestry Service closed the Smith Mountain Fire Tower and later deeded the tower and associated ten acre site back to Alabama Power Company.  The site became a dumping ground and the tower deteriorated into a dangerous condition. CRATA obtained title to the site and tower in 2010. Thanks to hardworking volunteers and generous donors, the tower has been restored and Smith Mountain has been transformed into a major tourist attraction.