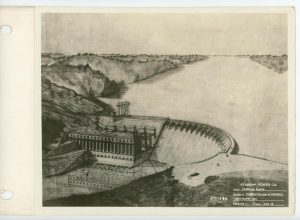 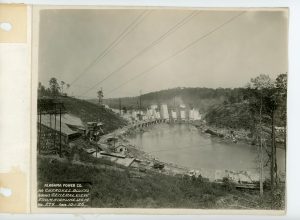 As early as 1916, Alabama Power began acquiring options and purchasing land to be flooded. Many families had left the area long before the company completed the 168-foot-high dam that stretched 2,000 feet across the Tallapoosa River gorge at Cherokee Bluffs. Until the dam and lake were dedicated it was simply known at the dam at Cherokee Bluffs.  The communities of Susanna (Sousanna) and Benson, including several houses and churches, were razed, and the company relocated 12 cemeteries containing 923 graves. Land clearing began in July 1923, and tracks were laid from the nearest rail-head at Kent so supplies could reach the isolated construction site ( Click here for our Trails that trace the old railroad bed ) . Through its construction company, Dixie Construction, Alabama Power built a complete village for workers, including housing, a mess hall, a commissary, a recreation hall and a hospital. (See picture gallery below for photos of some of the early buildings including a complete working hospital).

The dam included 431,000 cubic yards of concrete and was completed and the gates closed in 1926; however, the lake did not fill completely until heavy rains on April 23, 1928, forced the company to open several of the 20 floodgates for the first time. The total floodgate capacity is 3,016,000 gallons per minute. In 1926, the dam, and subsequently the lake, was named for Alabama Power President Thomas Wesley Martin but was not dedicated officially until 1936.

The water depth at the dam is 155 feet and the highest operating head (the difference between the top of the pool above the dam and the top of the pool below the dam) is 150 feet. Three generators began operating in 1926, with a fourth added in 1952. In 2018, the dam’s four generating units had a capacity of 182,500 kilowatts.

Lake Martin is a 41,150-acre reservoir on the Tallapoosa River that incorporates parts of Coosa, Elmore and Tallapoosa counties.  The lake borders four incorporated communities in east central Alabama: Alexander City, Jackson’s Gap, Dadeville and Eclectic.  At the time of its construction in the 1920’s, Lake Martin was the largest man-made lake in the world.

Martin Dam is almost 61 miles upstream from the junction of the Tallapoosa and Coosa rivers, which form the Alabama River. Lake Martin extends 31 miles upstream of Martin Dam and has a shoreline of about 880 miles at the full pool elevation of 491 feet above sea level.

Lake Martin has a distinctive shape that features multiple arms where Kowaliga Creek, Manoy Creek, Wind Creek, Sandy Creek and Blue Creek flow into the lake. Each watershed has distinct characteristics. Lake Martin provides a variety of recreational experiences such as boating, water skiing and wake-boarding, swimming, sailing and fishing. The lake’s extensive shoreline and sloughs provide habitat for warm-water species such as black bass and sunfish. The deep, open-water areas provide needed habitat for pelagic species such as striped bass and shad.